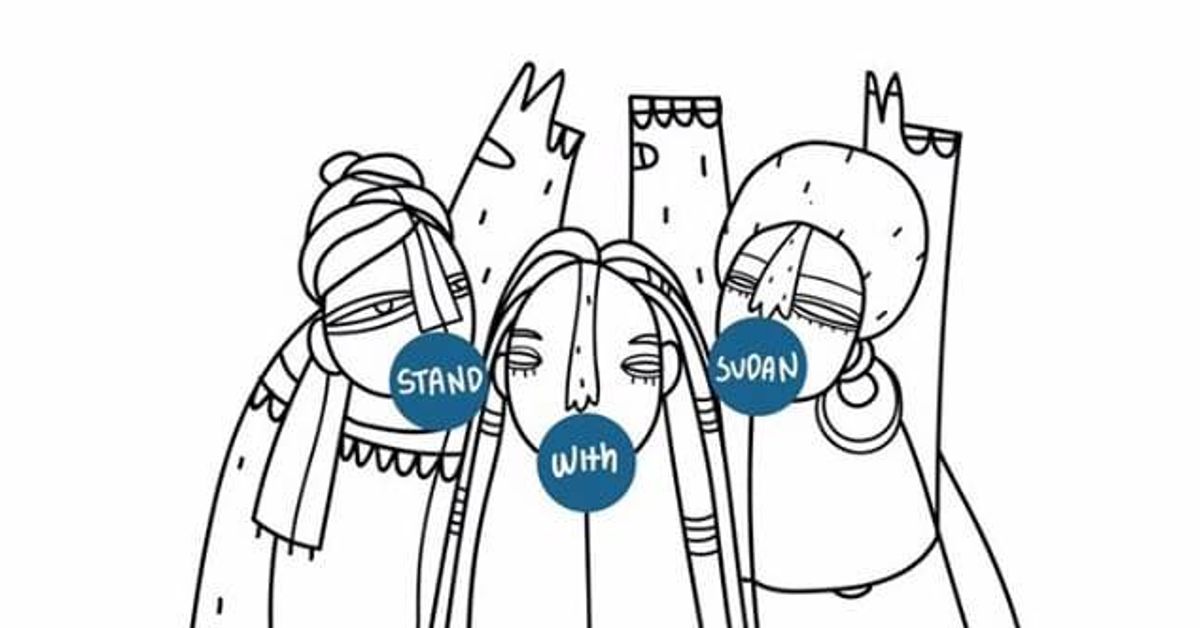 Like a thunder of anger in a deep silence it breaks out, a sword of light in the heart of darkness it goes forward,  it emerged from 30 years of  tyranny, oppression and the suppression of mouths and spirits, it rises from the ashes of  3000  villages burned to earth in Darfur by the Theocracy regime of the Islamic terrorists in Khartoum and its brutal racist militia Al Janjweed lead by Hemeti, it was spell out from the cries of more than 200 girls & women raped and distorted in the village of Tabit in October 2014,  it roared from the throats of more than 500,000 civilians displaced as a result of Janjaweed attacks, and millions of refugees in Diaspora.

The so called Sudanese revolution.

Since 19th of December, millions of Sudanese people risk their life to bring freedom and democracy in their country. Their uprising was peaceful. They have been continuously arrested, beated, tortured and killed. After years of resistance and protests, on 11th of April, they finally made the dictator Omar El Bachir fall down. But the monster has several heads. And now, other military chiefs, generals Borhan and Hemeti are trying to replace the previous regime with a new dictatorship, as if millions of Sudanese people claiming for a civil government wouldn’t exist.

On Monday, June 3, RSF militants attacked the democratic sit-in which had been installed for two months before the Ministry of the Armed Forces to demand the transfer of power to civilians. On this 28th day of Ramadan, the RSF militias under Hemetti's command intervened by surprise, encircling the scene, blocking all sorties, setting fire to the tents, burning the sleepers alive, firing live ammunition at the youths who were holding them. barricades and those who tried to flee, making no difference between men, women or children, whipping and raping all who were in their way. Then they attacked the hospitals, blocking their access to the wounded and physically attacking the doctors. Just in Khartoum, the RSF reportedly killed more than 100 people and injured more than 500 others, according to the Central Committee of Sudanese Doctors. The balance sheet is getting heavier every day. Hundreds of people are still missing. Corpses continue to rise to the surface of the Nile.

The military junta issued a statement denying its links to the incident, but videos filmed during the massacre confirmed that the perpetrator of this heinous act was the military junta formed by Ali's rapid support forces and ghost brigades. Osman Mohamed Taha and led by Hemetti. The massacre is a replica of the massacres committed under the command of Hemitti in the villages of Darfur.

Since more than a week, civilians live in a state of permanent fear. In Khartoum, Janjaweed militia breaks into houses to beat, rape and kill. Every Sudanese is subjected to total arbitrariness. Nobody knows if he will be alive tomorrow. To terrorize people, they attack at random and create a climate of general insecurity. After attacking certain neighborhoods, RSF paramilitary militia left some weapons behind, as an invitation for civilians to get armed. As it would be easier to justify their atrocities if it was against an army of citizens rather than killing peaceful protestors. For the moment, the Sudanese have not fallen into the trap. They continue to exercise peaceful resistance: civil disobedience, general strike, permanent reconstruction of barricades to hinder the movement of militias. But even civil disobedience is becoming a hard issue. The RSF forced people in charge of the Electricity company, bank employees or airplane  pilots to go to work. These workers were even attacked in their own homes and taken.                                                 .

Hemeti the new strong man of Khartoum now, deputy of the Army Council and deputy of Al Bashir before the revolution, is responsible for all these crimes. Howcome is the European Union still dealing with this people ?

We know that Hemeti is a war criminal. It’s been a week, he is doing to the whole country what he already did in one region, Darfur. Nowadays he is trying to protect his own interests, which means recruiting Sudanese kids to go for war in Yemen and continue to be the best soldiers provider for Saudi Arabia. This is how he made his fortune. It’s been months it had been proven that this man is buying kids to poor families in villages of East Sudan to sell them to his Saudi client. And he knows that if give up the power to the Civilians, he will loose his right to involve Sudan in a war that nobody wants to be part of and that he would be facing the risk to be judge for his previous crimes.

Until now, European Union had made an ally of Himatey, using him to close the borders to refugees trying to reach Libya and cross the sea. If UE continue to recognize him, it’s millions of new refugees she is going to have at its door.

We call European citizens to put pressure on their governments and the European Union to break the silence and take action.

EU countries must put pressure on UN to send a rapid deployment of a UN human rights monitoring team and bring perpetrators and those who issued the orders, including the top “Himatey”, to fair trial for the murderous attacked against the Sudanese and disarmed civiliansand. EU countries must have stronger position at the UN Security Council, as with the veto of China and Russia, UN has failed to condemn the violence. EU members must also put pressure on the Sudanese military authorities to lift the ban on the internet mobile service. EU must stop all their cooperation with Sudan except on the lifesaving humanitarian aid. EU members must respect the position taken on the 17th of April by the High Representative, Federica Mogherini, who said : “A swift and orderly handover to a civilian transitional body with full decision-making authority is the only way to enable a peaceful, credible and inclusive political process ».

Staying silent and still considering the Military Council as a political partner after the crimes committed this week, means supporting the crimes of military militias against peaceful civilians.